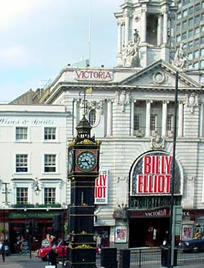 Each year, the Penn-in-London summer program offers students an opportunity to live in London for five weeks and to earn two credits in courses taught by faculty from English, Cinema Studies, and Theatre Arts. Michael Billington, lead critic for the Guardian in London, is a weekly guest lecturer.

The London Theatre experience, one of the most popular courses offered each year, focuses on plays in production. We attend a wide array of performances produced by such companies as the Royal National and Shakespeare’s Globe, and staged in such spaces as those of London’s West End and Fringe Theatres. The summer in London offers an incomparable opportunity to learn about a wide range of dramatic forms, acting styles, theatrical conventions, and performance spaces.

For further information about the program, visit the website of the College of Liberal and Professional Studies, which administers Penn’s summer abroad programs.