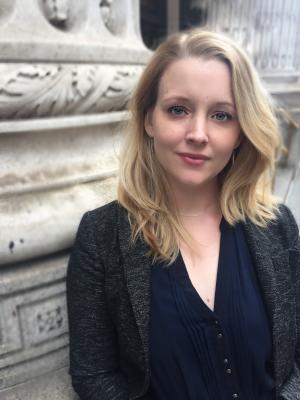 Jennifer Joan Thompson joins the Theatre Arts program after receiving her PhD in Theatre and Performance from the CUNY Graduate Center. Her research examines the relationship between theatre and politics, with a focus on 20th and 21st century Latin American theatre and performance. Her current book project, Dramaturgies of Democracy: Performance, Cultural Policy, and Citizenship in Chile, 1979-Present explores the dynamic between state politics, cultural policy, and theatrical aesthetics during the Chilean transition from dictatorship to democracy. Her writing has appeared in Theatre Journal, Theatre Survey, the Journal of American Drama and Theatre and the Routledge Companion to Theatre and Politics. Her research has been supported by Fulbright Hays and Social Science Research Council grants and she is a recipient of the International Federation of Theatre Research’s New Scholar’s Prize.

In addition to her research, she holds an MFA in acting from NYU and has trained at the Moscow Art Theatre. She has extensive professional experience as an actor, performing on and off Broadway at theatres such as Lincoln Center, The Public, Roundabout, Manhattan Theatre Club, and Ensemble Studio Theatre. She has also performed regionally around the country (including multiple world premieres) and worked in television. Prior to joining the Theatre Arts Program at Penn she taught courses in acting, theatre history, playwrighting, and Latinx and Latin American theatre and performance at Brooklyn College, City College, Marymount Manhattan College and Webster University.

THAR 0102.401 - Theatre, History, Culture II: Romantics, Realists and Revolutionaries
THAR 0104.401 - On the Stage and in the Streets: An Introduction to Performance Studies
THAR 2236.401 - Acting Shakespeare

THAR 101.401 - Theatre, History, Culture I: From Classical to the Middle Classes
THAR 286.401 - Latin American and Latinx Theatre and Performance