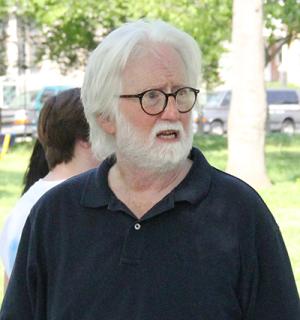 A proud native of Minnesota, Jim Schlatter has been a member of the Theatre Arts faculty at Penn since 1989.  He received his B.A. from the University of Minnesota, his M.A. from Villanova University, and his PhD from the City University of New York.   He wrote his dissertation on the life and work of the renowned Polish theatre director, Kazimierz Braun.  In addition to teaching courses regularly in acting, directing, advanced acting and directing, and theatre history, Jim directs productions for the Theatre Arts Program, many of which have served as the research site for the Senior Honors Thesis Project in acting.  Those productions range from adaptations of classical Greek plays, modern European dramas, modern American plays, and Shakespeare, including The Cherry Orchard, As You Like It, Trojan Women (in collaboration with fellow faculty member, Dr. Marcia Ferguson), Marriage of Figaro, The Crucible, Spring Awakening (the play), Urinetown, The Rover and most recently, In the Next Room, by Sarah Ruhl.  Jim has a special interest in modern and contemporary American theatre and drama and has published articles and delivered numerous conference papers on major American playwrights. In recent years Jim has focused his research and teaching in the ara of public performance art, a global movement that integrates the visual and performing arts and public space, often in major urban settings. His spring 2015 class organized an "Arts in the Park" festival in Malcolm X Memorial Park in West Philadelphia.  He served as Director of the Theatre Arts Program from 2004 to 2007.

A member of Actors’ Equity Association since 1984, Jim has performed in over sixty stage productions.  He worked for several years with the Villanova University Summer Theatre Festival, performing such roles as Malvolio in Twelfth Night, Capulet in Romeo and Juliet, Vladimir in Waiting for Godot, Reverend Morrell in George Bernard Shaw’s Candida, and Ben Franklin in 1776.  Jim has performed professionally in Philadelphia and has occassionally acted in Theatre Arts productions, most recently as Old Mahon in William Synge's Playboy of the Western World, directed by his colleague Dr. Marcia Ferguson.

Along with the other members of the Theatre Arts faculty, Jim advises students, consults on curriculum development, and helps to promote the educational mission of Theatre Arts throughout the University.  He feels honored to have received the award for Distinguished Teaching by Affiliated Faculty in the 2007-2008 academic year.  He is equally honored to be part of a dynamic theatre program that offers students a comprehensive introduction to the study of theatre in all its aspects—practical, historical, and theoretical—taught by a richly experienced, dedicated, and accomplished faculty.