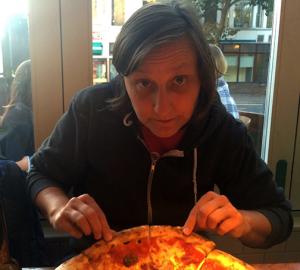 Brooke is a professional theater director and an artist. She is co-founder of the NYC based company The Theater of a Two-headed Calf and has developed and directed all 14 of Two-headed Calf’s productions including the OBIE Award winning Drum of the Waves of Horikawa (2007 HERE Arts Center), It Cannot Be Called Our Mother but Our Graves a.k.a Macbeth (Soho Rep Lab 2008/9), Trifles (Ontological Hysteric Incubator 2010), and the opera project You, My Mother (2012 at La Mama ETC, 2013 in the River to River Festival).

Brooke conceived, directed, wrote for, and performed in the Dyke Division of Two-headed Calf’s live lesbian soap opera Room For Cream which ran for three full seasons (25 episodes) at La Mama, ETC in NYC between 2008-10.

Brooke is currently working on several projects. She recently wrote, directed and produced the 4th part of a nine-part research and performance project titled I am Bleeding All Over the Place: Studies in directing or nine encounters between me and you. The project began in April 2014 at the New Museum, NYC. The project will culminate in a book on directing. Brooke is also the co-creator of a collaborative performance with artist Sharon Hayes called Time Passes. Time Passes is an 8-hour performance that uses the book-on-tape recording of Virginia Woolf’s To the Lighthouse as its spine.

Brooke is current recipient of the Doris Duke Impact Award for Theatre and her work has been supported by numerous awards, grants and residencies including several NYSCA grants, a Franklin Furnace performing artists award, an Arts Matters grant, the NEA/TCG Directors program, an OBIE award grant, a residency at The Performing Garage, and an LMCC space grant.

THAR 115.401 - Self-Scripting: Writing Through Body and Space
THAR 253.401 - Performing Parables: Ragas and Sagas of the Sundarban