The One Act Play Festival:  The Road Trip and Princess 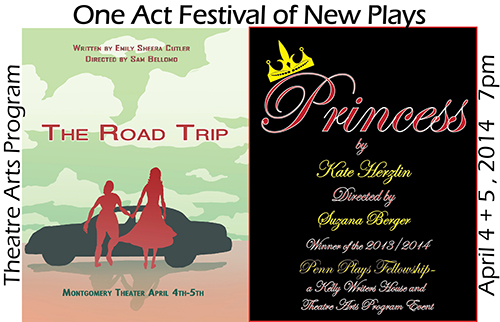 Unsatisfied with their lives, friends Kim and Julie drive away from their high school in search of adventure. On the road the two girls discover themselves and each other as road games turn into an unexpected insight into their lives. Jump in the back seat and follow these two girls as they put their friendship on drive.

Emily Sheera Cutler (playwright) is a sophomore in the College majoring in Communication with a minor in Creative Writing. This year, The Road Trip won the Young Playwrights Inc. National Playwriting Competition and was read off-Broadway. Her plays have also been recognized by Samuel French, the Alabama Shakespeare Festival, and the Alabama Writers Forum. Emily has been involved with the Theatre Arts department since freshman year, when she stage managed Iphigenia and Desdemona: A Play About a Handkerchief.

Princess, a 28-year-old who acts much younger, is matched by her parents to the man of her dreams. When things suddenly escalate and she realizes her happily ever after is entirely out of her hands, just as it was for her sister, she rebels to take back control.

Kate Herzlin (playwright) is a senior English major. She is the Chair of the English UAB, on Penn Players and Penn Singers Boards, and is the Outreach Coordinator at Kelly Writers House. She is also a literary intern at The Wilma Theater.  Kate hopes to be a playwright when she grows up.

Suzana Berger (C ’02)  (director) is a theatre artist and educator focused on vivid physical performance, building community partnerships, and creating new work that explores social issues imaginatively. Directing credits include Suzan-Lori Parks’ The America Play (Plays & Players); Spring Awakening (Penn Players); Jester’s Dead (The Outfit at Philly Fringe); Shakespeare Remix Macbeth and Leila Buck’s One (Epic Theatre Ensemble, NYC); If You Give a Mouse a Cookie (Synchronicity Performance Group, Atlanta); Naomi Wallace’s A State of Innocence (Culture Project, NYC); and Shakespeare’s Cymbeline. She is Artistic Director of Dragon’s Eye Theatre, where she has developed and directed A Mystery? and Seek & Hide, interactive theatrical adventures for the young in age and the young at heart. Suzana is a member of Lincoln Center Theater Director’s Lab. She holds an MFA in Theatre from Sarah Lawrence College and a BA in English from the University of Pennsylvania, where she teaches the August Wilson & Beyond course and Teaching Performing Arts for Cross-Cultural Education. 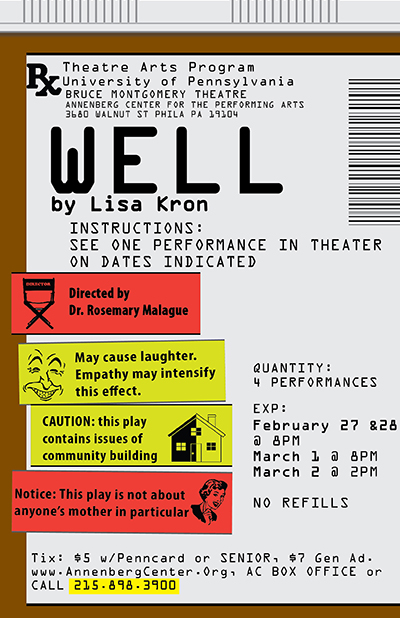 Visit the Provost's Art & Culture webpage for more information and a special video on this production.

The acclaimed writer/performer Lisa Kron's newest work is all about her Mom. It explores the dynamics of health, family and community with the story of her mother's extraordinary ability to heal a changing neighborhood, despite her inability to heal herself. In this solo show with other people in it, Kron asks the provocative question; Are we responsible for our own illness? But the answers she gets are much more complicated than she bargained for when the play spins dangerously out of control into riotously funny and unexpected territory.

In The Next Room 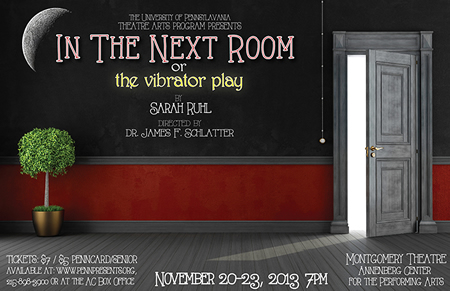