To be directed by Cary Mazer

Hollinger’s new translation aims to be spare and actor-friendly; immediate and theatrical; and true to the poetic sense of the original, though it does not adhere to Rostand’s strict meter and rhyming couplets. Rather, lyricism becomes a quality that waxes and wanes depending on the dramatic needs of each scene, and is developed through a range of poetic devices, including end rhyme, internal rhyme, alliteration, assonance, consonance, etc.

Photos from this performance, featuring members of the Theatre Arts community and Philadelphia actor Greg Wood: 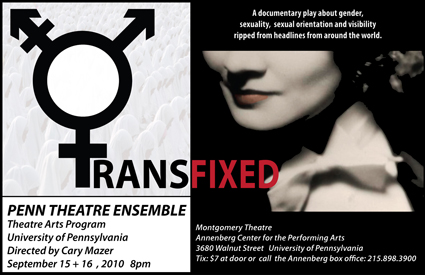 Compiled from verbatim sources—public speeches and documents, newspaper articles, interviews, tv shows, memos, press releases, blogs, and internet postings—Transfixed is a full-length documentary theatre piece about how governments and cultures control gender, sexuality, and sexual orientation by granting or denying visibility.  Linking disparate issues and events such as a Mississippi high school student who wanted to go to her prom with her lesbian girlfriend, a transsexual who competed on America’s Next Top Model, sex-change  operations in Iran, and the U.S. military’s “Don’t Ask, Don’t Tell” policy, Transfixed is about the questions that society doesn’t want to ask, and the stories that people aren’t allowed to tell to answer those questions.

By Greg Kotis and Mark Hollmann

Gotta pee?  Can’t pay?  Too bad!  That is the excruciatingly hilarious premise of Urinetown:  the Musical, the sensation of the 1999 New York International Fringe Festival and winner of nine Tony Awards in 2001.  Penn’s Theatre Arts Program returns the show to its rough and raucous downtown roots in an in-your-face cabaret-style production in the Annenberg Center’s intimate Bruce Montgomery Theater, running November 16-20, at 8:00 p.m.

Dr. James F. Schlatter of the Theatre Arts faculty directs this production, a featured program in the University of Pennsylvania Provost’s Year of Water events.

The Theatre Arts Program has hired Zachary Wiseley  as the Musical Director/Accompanist for this production. Philadelphia professional Millie Hiibel will be designing costumes,  Peter Whinnery will design lighting and Eric Baratta designs the scenic environment. Shannon Murphy, choreographer and dancer has joined the artistic team of URINETOWN as a movement director/consultant.  For more information on Ms. Murphy's work, visit http://www.groupmotion.org/

“LAUGH ‘TIL YOU CRY”

Following the Thursday, November 18th performance of Urinetown, produced by Penn’s Theatre Arts Program, a panel of Penn faculty and scholars will discuss the production in the context of new developments in the form of the American musical, modern American political theatre, and the influence on both of Bertolt Brecht’s plays and theories in creating a new political musical theatre in the 21st Century. The production and this panel are made possible in part by the generous support of the Provost’s Office, in conjunction with the Year of Water theme this year in the College of Arts and Sciences.

Special research and teaching interest in modern American theatre, including the political theatre of the 1930’s and 1960’s.

Professor Anat Feinberg. University of Heidelberg. Visiting Scholar in the Department of Near Eastern Languages and Civilizations. Specialist in postwar German theatre and Jewish Studies.

Mr. Stanley Laskowski. Lecturer in the Department of Earth and Environmental Sciences. Special interests include the attainment of the UN Millenium Development Goals for water and sanitation, and global environmental management and regulation. He is one of the founders of the Philadelphia Global Water Initiative.

The Good Times are Killing Me

The Good Times Are Killing Me by Lynda Barry, graphic artist and cartoonist, about an inter-racial friendship between two girls on a suburban block during the "white flight" of the 1960's.  Full of music, street dance, and humor, the play deals with serious subjects through the lens of a sweet and sour coming-of-age tale.  Many technical positions are open for this production, and there are many opportunities for actors, singers, and dancers, although no experience is necessary in any of the above categories.