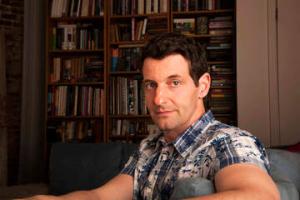 Greg Pierotti is an assistant professor of dramaturgy and collaborative playmaking at the University of Arizona, and an interdisciplinary theater artist. He and his collaborator Cristiana Giordano are currently investigating the intersection of ethnographic and theatrical writing and research practices. Pierotti’s devised theatrical works include, The Laramie Project, The People’s Temple and Laramie: 10 Years later. He is an Emmy nominated co-writer of the HBO teleplay of The Laramie Project. His work has been seen in venues around the world including Lincoln Center Theater and Brooklyn Academy of Music. He has developed new devised work at Berkeley Rep’s ground floor, Sundance theater lab, and Mason Dora Maar. He is the recipient of the Humanitas Prize, the Will Glickman Award for new plays, the San Francisco Critics award. He has been nominated for an Emmy award, a NY Drama Desk Award and the Alpert Award for outstanding individual contribution in the theater.

THAR 388.401 - Getting Caught: A Collaboration On and Off Stage Between Theater and Anthropology